Where children are, there is the golden age. 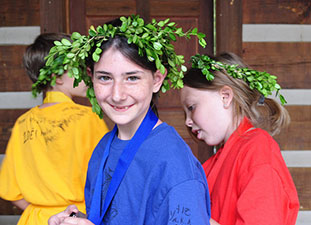 Just as in the earlier move in curriculum from mythology to history, the fifth grader’s development moves into more confidence, grace, and agility, both physically and socially. Students study Greek mythology and history, as well as the ancient civilizations of India, Mesopotamia, Persia, and Egypt. The fifth grade year culminates with the Pentathlon, a competition modeled after the ancient Greek Pentathlons that captures the fifth graders at the height of their grace and agility and signals the end of the “golden age” of childhood. As with all grades in the Waldorf curriculum, the Subjects scaffold the Main Lesson for an all-encompassing approach to learning.